Our Edge Cache feature can help you improve the performance of your website by storing static content like images, video, JS and CSS files on caching servers closer to end users, which reduces the latency that occurs as requested content travels longer distances across the network. You can force our Edge Cache feature to fetch a "fresh" version of the objects/content from your server by purging the cached objects.

The Object Purging functionality is available via nuu:bit's admin portal and API.

To flush an object or set of objects from the nuu:bit edge cache via the admin portal UI, do the following:

1. Identify the web domain and the set of objects to be purged.

For example, it can be a single object  like “/favicon.ico”, and a set of objects identified by a regular expression like “/images/*.img”.

3. Select a Domain and a Target Environment. Since the system allows you to test your new domain configuration in a separate so called Staging environment, it is also possible to purge cached objects separately in the Staging or Global (production) environments only or both of them at the same time.

5. Click the red Purge button. Please note that you also have the option to purge all objects by clicking the Purge All Objects button.

Please note that Domains with enabled Image Optimization feature use a secondary object caching storage, and in majority of cases when purging content for such domains objects should be removed from all caching tiers. You can uncheck the option if for a reason you don’t want to clear the secondary cache storage. 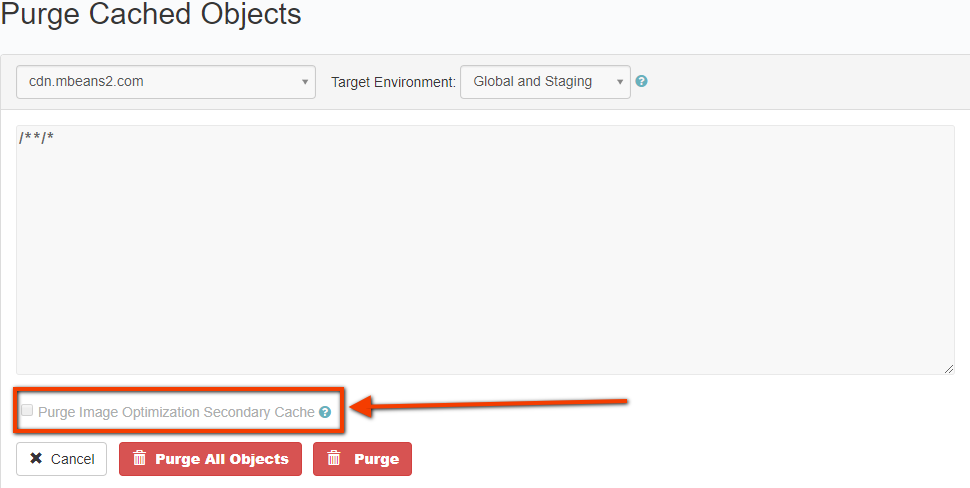 Have more questions? Submit a request

Article is closed for comments.
Powered by Zendesk